June 14- The Songs We Write: An Afternoon of Live Original Music 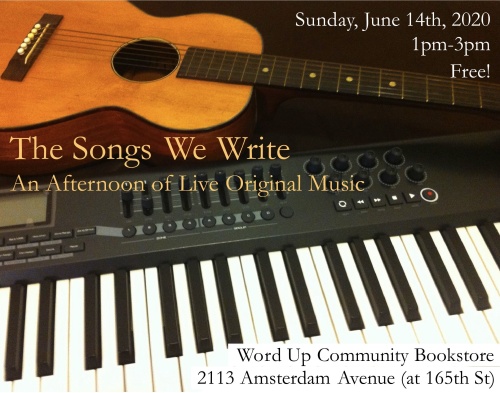 Come listen and enjoy original music! Featured performers are a mix of local songwriters, composers, and Song A Week members. Each artist will be performing music they have written. Trivia questions will be provided between acts – answer correctly and win a prize!

To learn more about the Song A Week project visit: www.songaweek.org

January 6 – Album Release: Dan Rauchwerk’s We Are More Than What We Leave Behind

Best described as a “musical Wikipedia,” songwriter, singer, and multi-instrumentalist Dan Rauchwerk seeks to educate as he entertains. A founding member of the internationally touring folk band The Lords of Liechtenstein, Dan has recently embarked on a solo career. At Word Up, Dan will be playing from his debut solo album, We Are More Than What We Leave Behind, alongside readings by friends.

December 16 – Words and Music Series: Session 4-from the Opposite Ends of Pisces

The next installment of our Words and Music Series pairs author/multimedia artist Sheila Maldonado and composer/musician Janice A. Lowe. Janice and Sheila met as teaching artists for Teachers & Writers Collaborative and spent time together at a residency at Kykuit, the Rockefeller estate in Westchester. They found they were quite copacetic, as they were actually cuspy Pisces on opposite ends, Sheila, Pisces/Aquarius cusp, and Janice, Pisces/Aries cusp. Here, they meet to blend word and sound intuitively as Pisces will do. They will experiment and play, remix poems together, draw sound out of the page and the spaces between words. The resulting collaboration will be performed by Sheila, Janice, and Janice’s band, Namaroon.

Sheila Maldonado is the author of the poetry collection one-bedroom solo (Fly by Night Press, 2011). Her 2nd publication, that’s what you get, is forthcoming from Brooklyn Arts Press. Her poems have appeared in Gulf Coast, Ping Pong, and The Wandering Song: Central American Writing in the United States. She is a CantoMundo Fellow and a Creative Capital awardee as part of desveladas, a visual writing collective. She has served as an artist-in-residence on Governors Island for the Lower Manhattan Cultural Council. She teaches creative writing for The City University of New York.

Janice A. Lowe writes and composes music-text hybrids. She is the author of Leaving CLE poems of nomadic dispersal and composer of the musical LIL BUDDA, text by Stephanie L. Jones. Her poems have appeared in Callaloo, Best American Experimental Writing, (Pre)Conceivable Bridges and Solidarity Texts: Radiant Re-Sisters. As a pianist/vocalist, Janice has recorded with the experimental bands w/o a net, HAGL, and Digital Diaspora, and she performs with her band, NAMAROON. She is a co-founder of the Dark Room Collective.

This is the fourth installment of the Words and Music series, which presents new collaborations between wordsmiths and musicians at Word Up Community Bookshop.

Words and Music is made possible in part with public funds from Creative Engagement, supported by the New York City Department of Cultural Affairs in partnership with the City Council and the New York State Council on the Arts with the support of Governor Andrew Cuomo and administered by Lower Manhattan Cultural Council.